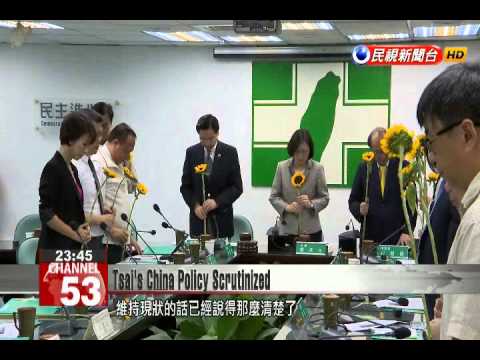 The DPP has again found itself defending the China policy of presidential candidate Tsai Ing-wen. Tsai insists that she will maintain the status quo, but Beijing wants her to go further by expressing opposition to Taiwanese independence and support for the 1992 Consensus. After an early morning return to Taiwan, Tsai Ing-wen reported on her US trip at the DPP’s Central Standing Committee meeting this afternoon. Her focus was cross-Taiwan Strait policy.Tsai Ing-wenDPP ChairwomanThe DPP is responsible for building stable, uniform and predictable cross-strait relations. On the topic of cross-strait peace, it will continue dialogue with all sides and the resolution of differences.Tsai reiterated her commitment to maintaining the cross-strait status quo. But this may not be enough for China, which insists that Tsai openly state support for the so-called 1992 Consensus and the one China principle and opposition to Taiwanese independence.Ma XiaoguangChina’s Taiwan Affairs OfficeOpposition to Taiwanese independence and commitment to the 1992 Consensus form the joint political foundation that peaceful development of cross-strait relations is built on. At the core is placing the mainland and Taiwan together under one China. The DPP must give a clear explanation on exactly what kind of relationship the two sides of the Taiwan Strait share.Cheng Yun-pengDPP SpokesmanChairwoman Tsai has clearly stated her position. Under the framework of the ROC constitutional government, she will follow general popular will by continuing to promote peaceful and stable cross-strait development on the basis of more than 20 years of negotiations, exchanges and interaction.The DPP disputes the existence of the 1992 Consensus because it says no consensus was ever reached. It instead points to the core idea of the Wang-Koo summit, which was to achieve peaceful development by seeking common ground while shelving differences.

『The Irishmen Who Fought in the Last Great Battle Against Spanish Fa...