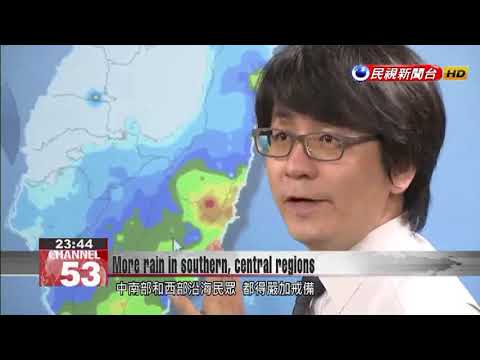 Just after a tropical depression devastated parts of central and southern Taiwan, more rain is in store for these regions over the next four days with the arrival of a southwesterly air current in southern Taiwan. While there won”t be so many violent bursts of heavy rain this time around, the Central Weather Bureau says it is forecast to rain for longer. People who live along Taiwan”s western coastline will also be affected. Not only are they urged to take precautions against flooding, there may also be severe gusts of wind.A tropical depression, described by the CWB as “very rare” recently dumped heavy rain violently on southern Taiwan. Although the rain eased up this weekend, people in Taiwan”s central and southern regions, along with those who live along the western coastline, are now taking precautions following a forecast of even more rain triggered by a southwestly air current. Hsu Chung-iCentral Weather BureauIt should be noted that sudden bursts of heavy rain in this wave of rainfall may not be as intense as the last wave. What”s special about this wave of rain is that it will have quite a long duration. People should be especially alert to heavy rains brought by the tropical depression and the southwesterly air current from tonight through to Tuesday. The new wave of rain brought by the southwesterly air current will start affecting southern Taiwan tonight. On Monday and Tuesday, the rainfall will gather more momentum and will not gradually ease off until August 29. The quantity of rainfall will be concentrated in regions in Pingtung and Kaohsiung. However, the central regions could see 100mm of rainfall or more.Hsu Chung-iCentral Weather BureauIn addition to rainfall, the impact of the southwesterly air current could cause wind gusts of between 8 to 10 on the Beaufort scale across open areas along the western coastline, along with the outlying islands. The CWB reminds members of the public living along the western coastline to guard against strong winds as well as flooding.