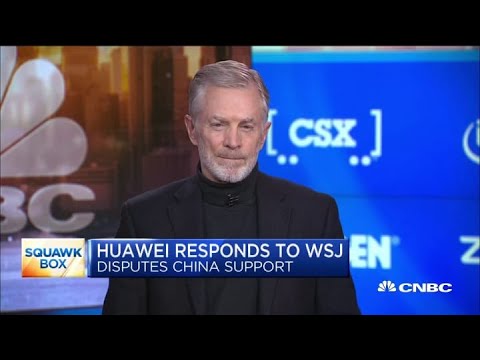 “There are instances of wrongdoing by us and other companies, and any instance of that is wrong,” Purdy told CNBC’s “Squawk Box.” “I’m saying when you conflate it to be this gigantic thing, that’s not true.”

The Chinese telecommunications giant has been repeatedly accused of IP theft by its rivals and the U.S. government, though Huawei has maintained that it respects intellectual property rights. Purdy, when responding to IP theft claims in May, told CNBC that he doesn’t “forgive acts that have happened in the past.”

When asked about it on Friday by CNBC’s Becky Quick, Purdy, a former top cybersecurity official at the U.S. Department of Homeland Security, shot down claims that Huawei is a repeated perpetrator of IP theft.

Purdy’s interview comes two days after The Wall Street Journal reported that Huawei had access to as much as $75 billion in Chinese support over the past 25 years as it grew to become the world’s largest telecommunications equipment company.

The newspaper reported that a large part of the assistance, roughly $46 billion, came from loans, credit lines and other state support. Additionally, it saved as much as $25 billion in taxes between 2008 and 2018 with state incentives and received $1.6 billion in grants and $2 billion in land discounts, the Journal reported.

“The fact is there are lines of credit issued between 2005 and 2011,” Purdy said. He added that a “tiny fraction” was ever used was from loans from customers.

“To take the gross figure of the credit lines is really not fair to talk about that as being assistance from the government,” he said.

Purdy added that credit lines shouldn’t be considered government assistance for the company, since they were made available by banks to customers.

The Wall Street Journal did not immediately respond to a request for comment on Purdy’s remarks.

Turn to CNBC TV for the latest stock market news and analysis. From market futures to live price updates CNBC is the leader in business news worldwide.