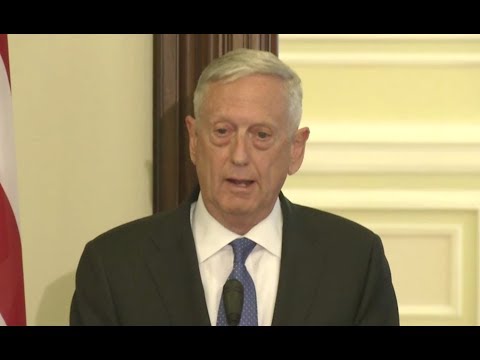 On the 26th anniversary of Ukraine’s independence from Moscow, U.S. Defense Secretary Jim Mattis sharply criticized Russia as an international menace and said the Trump administration will not accept Moscow’s annexation of Ukraine’s Crimea region.

After attending a raucous and colorful independence day parade, Mattis met with President Petro Poroshenko and other top government leaders. He is the first Pentagon chief to visit the former Soviet republic since Robert Gates in 2007.

“Have no doubt,” Mattis said at a news conference with Poroshenko. “The United States stands with Ukraine.” He said Washington does not, “and we will not,” accept Russia’s annexation of Crimea, a 2014 action that was followed by Russian military intervention in support of separatists in eastern Ukraine.

“Despite Russia’s denials, we know they are seeking to redraw international borders by force,” Mattis said, an ambition by Moscow that Mattis said is undermining sovereign European nations and stirring tension.

Mattis ticked off a series of international agreements and commitments that Moscow has made since the collapse of the Soviet Union in 1991, including a two-year-old accord known as the Minsk Agreement, which lays out a roadmap for reducing the conflict in Ukraine that has claimed some 10,000 lives over the past three years. He also cited other Russian commitments to Ukraine dating to 1994.

“Unfortunately, Russia is not adhering to the letter, much less the spirit of these international commitments,” he said.