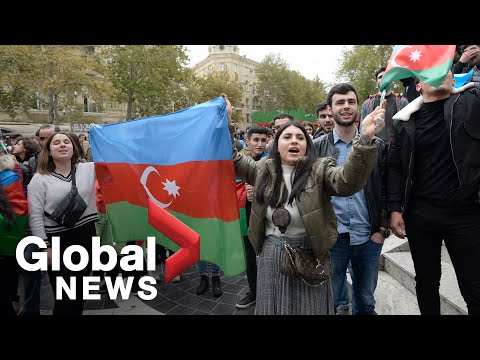 The ceasefire over the disputed Nagorno-Karabakh region triggered celebrations in Baku, the capital of Azerbaijan, where cars and buses sounded their horns in delight and people cheered and waved the Azeri national flag after the peace deal was signed.

Under the deal reached by Azerbaijan, Armenia and Russia, Azerbaijan will keep territorial gains made in the fighting, including the enclave’s second city of Shusha, which Armenians call Shushi. Ethnic Armenian forces must give up control of a slew of other territories between now and Dec. 1.

Armenia’s defense ministry said military action had halted and calm had been restored in the breakaway territory, which is internationally recognized as part of Azerbaijan but populated and, until recently, fully controlled by ethnic Armenians.

Russian peacekeeping troops were deployed to the mountain enclave of Nagorno-Karabakh as a part of a ceasefire deal.

In fighting that flared on Sept. 27, Azerbaijan says it retook much of the land in and around Nagorno-Karabakh that it lost in a 1991-94 war in which about 30,000 people were killed.

Kremlin spokesman Dmitry Peskov said there had been no agreement on deploying any Turkish peacekeepers in Nagorno-Karabakh, but the Turkish military will help staff a joint monitoring center with Russian forces.