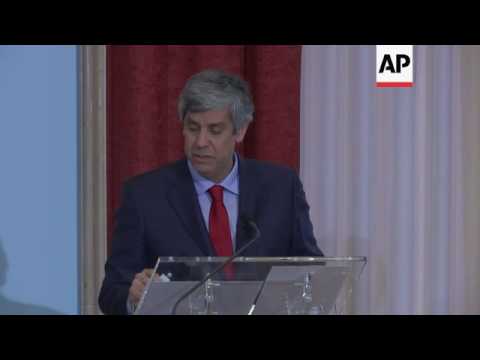 AP TELEVISION – AP CLIENTS ONLY
Lisbon – 5 February 2016
1. Portuguese Finance Minister Mario Centeno arriving to the news conference
2. Cutaway of photographer
3. Centeno presenting draft budget for 2016
4. Presentation on screen with words reading (Portuguese) “Presentation of 2016 Draft Budget”
5. SOUNDBITE (Portuguese) Mario Centeno, Portuguese Finance Minister:
“The macroeconomic scenario of the state budget implies 1.8 GDP growth. To this, we add a budget deficit of 2.2 percent. A public debt that will reach by the end of the year 127 percent of GDP and a structural deficit that will see a decrease of 0.3 percent.”
6. Wide tilt down of news conference
7. Mid tilt up of Centeno listening to questions from journalists
8. Cutaway of photographer
9. SOUNDBITE (Portuguese) Mario Centeno, Portuguese Finance Minister:
“I underline that it will not be necessary (for us) to submit another DBP (draft budget proposal). We will not have to resubmit the draft. As I said before, when an agreement is reached there are no winners, however, we do obviously take note of the reservations referred by the (European) Commission. This kind of alert, I must highlight, is not unusual. Countries such as Spain, Belgium, Italy, Austria – to mention only a few and I am mentioning the most recent cases, had the same budget assessment by the European Commission.”
10. Various of audience at press conference
11. End of press conference
12. Centeno and his team leaving
13. Close of Portuguese and EU flags
STORYLINE:
Portuguese Finance Minister Mario Centeno presented a draft budget for 2016 in Lisbon on Friday, and predicted a national debt decrease of 0.3 percent by the end of the year.
Centeno said the budget deficit would drop to 2.2 percent of GDP this year, within the EU’s limit of 3 percent.
The European Commission approved Portugal’s so-called anti-austerity spending plan on Friday, but only after extracting a promise for almost 1 billion dollars US in additional cost cuts.
The approval was conditional, however, with EU Commissioner Pierre Moscovici saying the new Portuguese “government’s plans are at risk of non-compliance with” EU rules to keep deficits down and would need strict monitoring.
The Commission also claimed that Lisbon had made excessively optimistic growth forecasts, and estimated the budget deficit would be 3.4 percent.
Left-wing and centre-left governments – particularly in Greece, Spain, Italy and France – have long complained that the EU’s Executive Commission required them to cut public spending they argued was needed to foster economic growth.
===========================================================
Clients are reminded:
(i) to check the terms of their licence agreements for use of content outside news programming and that further advice and assistance can be obtained from the AP Archive on: Tel +44 (0) 20 7482 7482 Email: info@aparchive.com
(ii) they should check with the applicable collecting society in their Territory regarding the clearance of any sound recording or performance included within the AP Television News service
(iii) they have editorial responsibility for the use of all and any content included within the AP Television News service and for libel, privacy, compliance and third party rights applicable to their Territory.