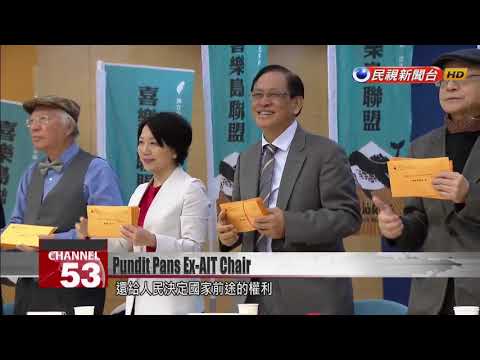 This week, former AIT chairman Richard C. Bush stoked debate with an open letter addressed to Formosa Alliance. In the letter, Bush challenged Formosa Alliance”s campaign to amend the Referendum Act and to allow a vote on Taiwan independence. He said Formosa Alliance needed to consult with the U.S. government before taking action. The letter has been denounced by commentators including Cao Changqing, who asked why Washington should be consulted about Taiwan”s future. Formosa Alliance has repeatedly called for a Taiwan independence referendum that restores the people”s right to self-determination. In a recent open letter, a former AIT chairman said Formosa Alliance should not act without first consulting with the U.S. The letter has drawn fierce criticism.Cao ChangqingPolitical commentatorIf you hold a referendum, there is independence and unification on the ballot. There are different options. If you don”t agree, you can vote against it. You can”t deprive the people of the right to vote. Whatever the Taiwanese people choose should be the vote of 23 million citizens. Richard C. Bush is American. If he were a civilized person, he would respect the Taiwanese people”s right to choose.Cao said that status quo in the Taiwan Strait was in fact changing, and that it was being altered by Beijing.Cao ChangqingPolitical commentatorAcross the strait, China is changing. It is continuously intimidating Taiwan with missiles, but does Taiwan fight back? Does Taiwan want to annex China? No, right? What the Taiwanese people want to do is retain the independence of their country.Cao issued a string of refutations to Bush”s argument. He also pointed out that since Bush left office as AIT chairman, he has shared close quarters with the pan-blue coalition. Cao said it was worth examining Bush”s motivations for writing the letter and considering who stands to benefit.