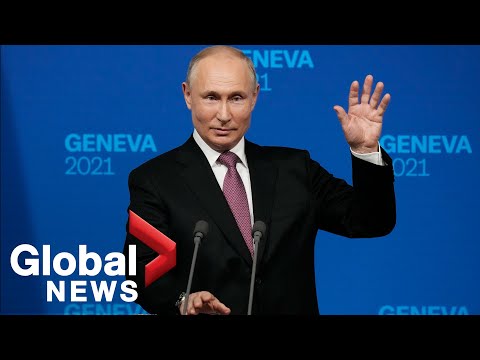 Russian President Vladimir Putin spoke at a press conference in Geneva, Switzerland after a summit meeting with U.S. President Joe Biden, where he fielded questions from reporters on cybersecurity, human rights, and what he thinks of the newest American president, saying he saw a “glimpse of hope” into what U.S.-Russia diplomatic relations could be despite Washington’s move to exit arms treaties.

Putin batted away the question about his political rivals crackdown on Wednesday by changing the subject to what he said was disorder in the United States around the storming of the U.S. Capitol and Black Lives Matter.

“America just recently had very severe events, well-known events after the killing of an African American. An entire movement developed, known as Black Lives Matter,” Putin told reporters he did not want to see “riots” happen in Russia.

Speaking about Kremlin critic Alexei Navalny, Putin said the opposition leader knew he was breaking Russian law and would be detained when he returned to Russia in January but decided to come anyway.

Putin also said he was satisfied with U.S. President Joe Biden’s explanation for calling him a “killer” earlier this year, and that the two had discussed human rights at their summit in Geneva.