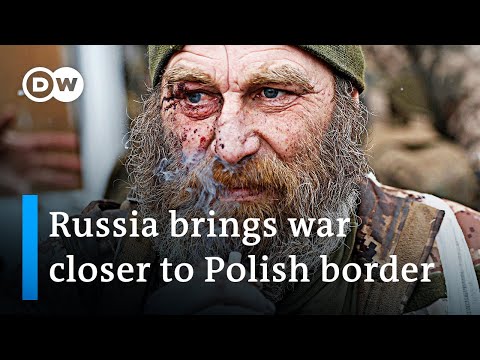 An area outside the major western Ukrainian city of Lviv was targeted by a missile attack early Sunday. Eight missiles are believed to have been fired at Ukraine’s Center for International Peacekeeping and Security, according to Lviv’s Regional Military Administration on Telegram. The center is located in Yavoriv, not far from the Polish border and some 40 kilometers (25 miles) northwest of Lviv. Lviv regional governor Maksym Kozytskyy said on Telegram that 35 people have died in the strike and a further 134 were injured. The strike on the military base could possibly be a Russian message intended for NATO. The US and other NATO countries previously conducted training exercises with the Ukrainian military at the center called Rapid Trident 21, according to the US Army website. A Ukrainian general cited by the US army website said the Rapid Trident 21 exercises held at the Yavoriv center were “not just another stage of military skills improvement, but also an important step towards Ukraine’s European integration.” Ukraine’s defense minister said in a tweet that “foreign instructors” work at the training center. A NATO official told Reuters news agency that there were no alliance personnel at the base. The mayor of Ivano-Frankivsk, Ruslan Martsinkiv, said on Facebook that the western Ukrainian city’s airport was also targeted in an attack early Sunday.

A Russian airstrike in the southern city of Mykolaiv near Odesa left nine people dead, according to regional governor Vitaliy Kim. Mykolaiv serves as an important transportation hub within Ukraine.

The UK’s Defense Ministry (MOD) said Russian forces are attempting to “envelop” Ukrainian troops in the eastern parts of the country “as they advance from Kharkiv in the north and Mariupol in the south.”