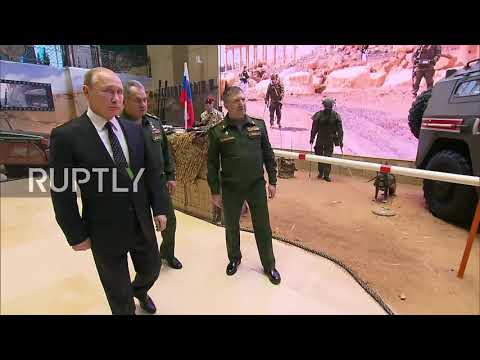 Russian President Vladimir Putin attended an exhibition of weapons and equipment seized from militants in Syria, in Moscow on Tuesday.

According to the MoD, nearly 100 different types of weapons from pistols to grenade launchers manufactured in 18 countries, including Austria, Belgium, Great Britain, USA, Israel, the USSR and France were shown to the Russian leader.

Among other samples that were shown to the Russian president were military command posts equipped with digital and modular radio stations, explosive devices that were disguised as toys for children, cans of drinks and other civilian items made by the militants.

The exhibition also devoted a section to unmanned aerial vehicles (UAV), which the Russian military managed to neutralise in Syria.

‘Jihad-mobile’ – an armoured civilian off-road vehicle stuffed with explosives – was among the bigger objects displayed at the exhibition.

In addition, the exhibition displayed documents seized by military policemen from militants, extremist literature and flags of prohibited organisations.

The president was shown the sets of humanitarian aid supplied to Syria under the UN World Food Programme and the International Committee of the Red Cross, which were taken from the militants.