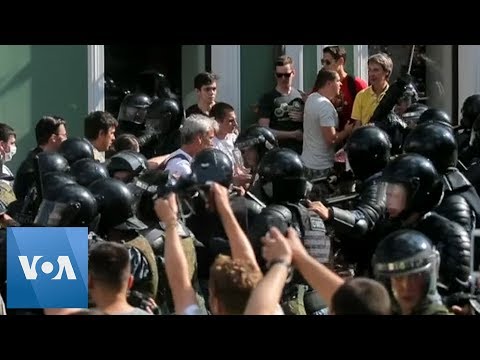 Riot police used batons Saturday, July 27, as they crashed on the Moscow protest in support of the candidates barred from participation in the city parliament election. (Reuters)
Russian police on Saturday beat some people and arrested more than 1,000 who were protesting in Moscow against the exclusion of opposition candidates from a local election later this year. Police also stormed into a TV station broadcasting the protest.
Police grappled with protesters around the mayor’s office, sometimes rushing the crowd with batons raised. State news agencies Tass and RIA-Novosti cited police as saying 1,074 were arrested during the protests, which ran for seven hours.
The protesters, who police said numbered about 3,500, shouted such slogans as “Russia will be free!” and “Who are you beating?” One young woman was seen bleeding heavily from a head wound.