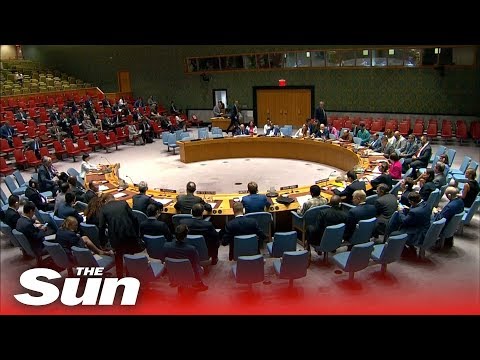 ☆タイトル：Russia: 'We are all one step from an arms race'

Russia warned of a potential arms race with the United States on Thursday (August 22) during a Security Council meeting about U.S. plans to develop and deploy medium-range missiles.

“On the whole, do you realize that because of the U.S.’s geopolitical ambitions we are all one step from an arms race that could not be controlled or regulated in any way? We are very concerned by the prospect of that. But our American colleagues it seems are not,” said Russia’s deputy ambassador to the United Nations.

The Pentagon said on Monday it had tested a conventionally configured cruise missile that hit its target after more than 500 km (310 miles) of flight, the first such test since the United States pulled out Cold War-era Intermediate-Range Nuclear Forces Treaty (INF).

U.S. Defense Secretary Mark Esper was asked in a Fox News Channel interview on Wednesday whether the test was aimed at sending a message to China, Russia or North Korea and indicated that the main concern was China.

Russian President Vladimir Putin said on Wednesday the United States was in a position to deploy a new land-based cruise missile in Romania and Poland, a scenario he considered a threat that Moscow would need to respond to.

The United States has said it has no imminent plans to deploy new land-based missiles in Europe.

This week’s U.S. test would have been banned under the INF, which prohibited land-based missiles with a range of between 310 and 3,400 miles, reducing the ability of the United States and Russia to launch a nuclear strike at short notice.

China was not a party to the INF treaty and has a large arsenal of land-based intermediate-range missiles.

During the Security Council meeting, the U.S. blamed Russia for violating the INF agreement.

“The United States will not remain a party to a treaty that is deliberately violated by Russia,” said U.S. acting ambassador to the U.N. Stephen Cohen.

He added, “The United States is taking the necessary steps to address the threat posed by intermediate-range missile forces being deployed in ever larger numbers by Russia and China which the INF treaty failed to hinder.”

Washington formally withdrew from the landmark 1987 pact with Russia on Aug. 2 after determining that Moscow was violating the treaty, an accusation the Kremlin has denied.

From Brexit breaking news to HD movie trailers, The Sun newspaper brings you the latest news videos and explainers from the UK and around the world.

『Breaking News | ‘a conservatism that keeps the british dream alive’...