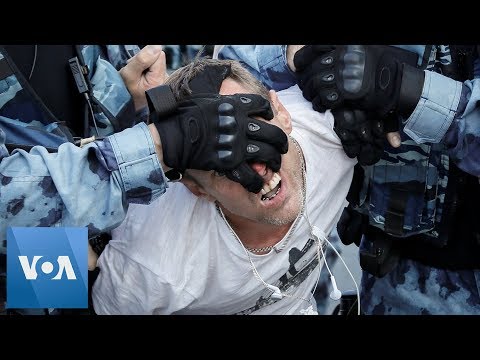 ☆タイトル：Russian Police Use Batons on Protesters at Demonstration

Another day of protests continued in Moscow as a rally in support of opposition candidates in local elections turns violent, Sunday, July 28. Riot police beat protesters with batons as police dogs barked and people tried to free protesters being held by police.

The police detained more than 1,300 people in a day of protests against alleged irregularities in the run-up to local elections, according to an independent group that monitors crackdowns on demonstrations.

The crackdown continued after the protesters moved to other locations in the Russian capital, chanting slogans such as “Russia without [President Vladimir] Putin!”

The United States, the European Union, and human rights groups denounced what they called the “disproportionate” and “indiscriminate” use of force against the demonstrators, who were protesting against the refusal of election officials to register several opposition figures as candidates in municipal polls in September.