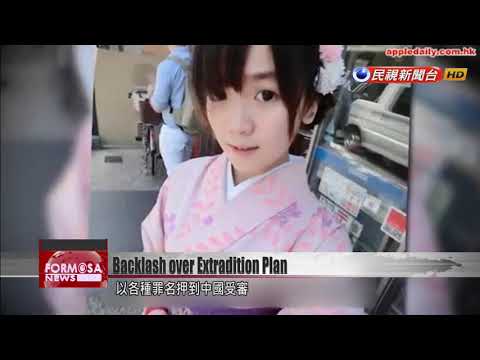 Hong Kong”s government has proposed an amendment that would allow the extradition of fugitives to Taiwan and China. The move comes as Taiwan prosecutors request the surrender of a Hong Kong youth suspected of killing his girlfriend while they were vacationing in Taiwan. If passed, the amendment would allow Hong Kong to send the suspect to Taiwan for trial. But some in Taiwan are wary of the proposed change. New Power Party lawmakers fear that the measure could be used to send Taiwanese nationals over to China for prosecution. Last year a teen suspected of killing his girlfriend in Taiwan fled to his native Hong Kong. The Hong Kong government is now seeking to amend its laws to allow extraditions in the absence of an extradition treaty. On the face of it, the amendment simply allows Hong Kong to consider such extradition requests on a case-by-case basis. But some fear the measure would let Hong Kong send Taiwanese citizens to China for trial.Hsu Yung-mingNPP lawmakerThe proposal basically treats Taiwan as part of the People”s Republic of China. People doing business or studying in Hong Kong could get extradited to China for remarks they made in Taiwan that infringe upon Chinese laws.Hong Kong”s government previously said that the new measure would not cover suspects in political cases. But the NPP says China could still get its hands on Taiwanese political targets, by accusing them of minor non-political offenses. NPP lawmakers urged Taiwan”s government to lodge a strong protest against the proposed amendment.Huang Ting-huiMainland Affairs CouncilThe Taiwan government absolutely will not accept any move aimed at destroying national sovereignty. So we hope that Hong Kong”s government will take the welfare of citizens of both sides as its foremost consideration.Figures from Hong Kong”s pro-democracy camp, including Eddie Chu, Edward Yiu and Joshua Wong, spoke out against the amendment at a press conference. They warned that if passed, the bill would deal a major blow to Taiwan”s democracy.

『China's communist party has come of age – the west should wake up |...