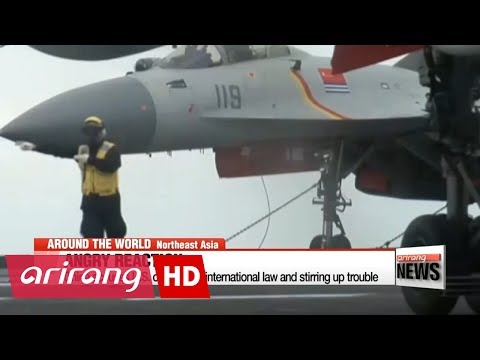 A U.S. warship sailed near a disputed island in the South China Sea on Sunday… prompting Beijing to send navy vessels and warplanes to the area in response.
This marks the second freedom of navigation exercise conducted by the U.S. Navy… around the island chain, in less than six weeks.
Yu Joonhee reports.
On Sunday, the USS Stethem sailed within 22 kilometers of Triton Island, territory which is claimed by China, Vietnam and Taiwan.
Pentagon officials said the U.S. Navy destroyer was conducting a routine freedom of navigation exercise, and said it will continue to do so in the future.
However, experts say the move signifies Washington’s refusal to recognize China’s claims of sovereignty in the island chain… while testing Beijing’s requirement for prior notification before entering its claimed territorial waters.
China reacted with outrage, and said it has dispatched navy vessels and fighter jets to the region to “warn off” the U.S. warship.
Beijing’s Foreign Ministry Spokesperson Lu Kang said the U.S. warship was acting in violation of Chinese and international law, and disrupted peace and stability in the region.
He added that China will take all necessary measures to protect its security interests, and accused the U.S. of deliberately stirring up trouble in the South China Sea.
The incident comes in the midst of growing signs of frustration by the Trump administration directed at China, for a perceived failure to rein in North Korea.
The U.S. has been renewing its pressure on Beijing, imposing fresh sanctions on Chinese individuals and entities suspected of conducting business with the North.
Washington also approved the sale of a one-point-four billion dollar arms package to Taiwan, which is regarded by China as a renegade province.
President Trump is set to meet with his Chinese counterpart Xi Jinping this week, on the sidelines of the G20 summit in Germany.
Although the pair enjoyed a cordial relationship during their first meeting in February, bilateral relations have cooled significantly since then… with many observers worrying their honeymoon period is now over.
Yu Joonhee, Arirang News.

『Portuguese MEP Maria Joao Rodrigues: “I am sure that Europe has a f...

『How a Brit got Asia to fall for Macau's Portuguese egg tarts | ...