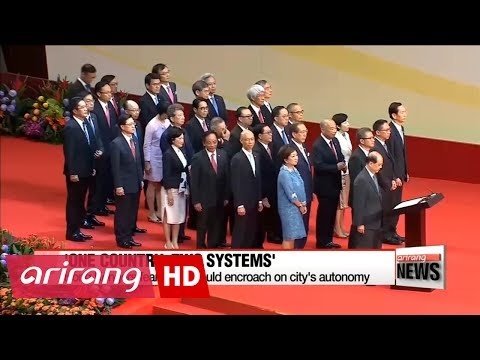 Marking the 20th anniversary of the handover on Saturday,… Chinese President Xi Jinping warned Hong Kong that there’s no tolerance for subversion.

“Any attempt to endanger China’s sovereignty and security, challenge the power of the central government and the authority of the basic law of the Hong Kong Special Administrative Region, or use Hong Kong to carry out infiltration and sabotage activities against the mainland is an act that crosses the red line, and is absolutely impermissible.”

This is President Xi’s first visit to Hong Kong since taking office in 2013… and there are fears Beijing could encroach on the city’s autonomy that guarantees a framework known as “one country, two systems.”
President Xi’s speech came after the swearing in of Hong Kong’s first female Chief Executive Carrie Lam.
Lam called for unity to reunite the city… hours after police clashed with pro-democracy protestors outside the venue.
The protestors were demanding more voting rights as well as the immediate release of the Chinese dissident Liu Xiabo.
The tussle went on for more than an hour,… only ending after leaders of the pro-democracy demonstration were led away by police.
Kim Hyun-bin, Arirang News.