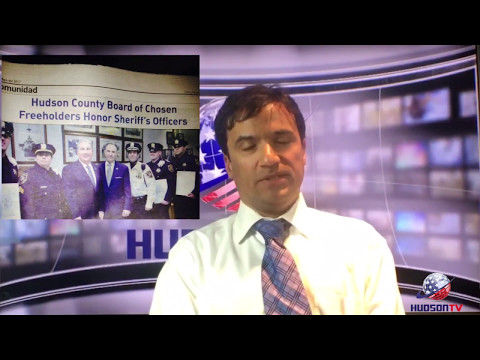 Why would a Spanish-language newspaper, with a Spanish-literate audience, run advertisements and legal notices, in English?

Maybe when those ads are paid for by taxpayers, when they’re on behalf of the Hudson County Sheriff’s Office, or North Bergen.

This isn’t a small mistake. HudsonTV found that nearly half of a recent issue of a Spanish-only newspaper run out of Union City consist of English public notices and layouts touting the Office of Hudson County Sheriff Frank X. Schillari and North Bergen.

The Sheriff’s Office has 19 full pages of layouts and pages of public notices — all in English — in the last full issue.of the Spanish-only Cine y Novelas newspaper. Notices run onto one more page, while North Bergen accounts for two more pages, a total of 21-plus pages of English content paid for by public entities in an issue of only 48 pages.

A two page layout featuring North Bergen school events, in which that town’s Mayor Nicholas Sacco is quoted several times on pages 31-32, may also have been paid by that township or its school system.

Neither Sacco nor the public relations firm of Vision Media Marketing Inc., which handles publicity for both the Sheriff and North Bergen’s school system, responded to HudsonTV’s requests for comment.

On page 23 is a full page English press release and photo about the Sheriff’s Office apprehending a man wanted for attempted murder. On pages 46-47 is a two page spread, entirely in English, about Schillari commending various Sheriff’s officers.

But that’s not the only curious thing about the Spanish newspaper Cine y Novelas.

The newspaper’s own website lists an ex-felon as its legal counsel, a Guttenberg lawyer named Fernando Jimenez. That’s the same Fernando Jimenez who was convicted at trial in 2004 of two counts of federal mail fraud as part of a real estate mortgage scheme masterminded by Rene Abreu. According to court records, Jimenez was sentenced to six months imprisonment, three years supervised release and ordered to pay over $300,000 in restitution.

『Ukraine war to lead to a frozen conflict? Russia's ploy to keep...