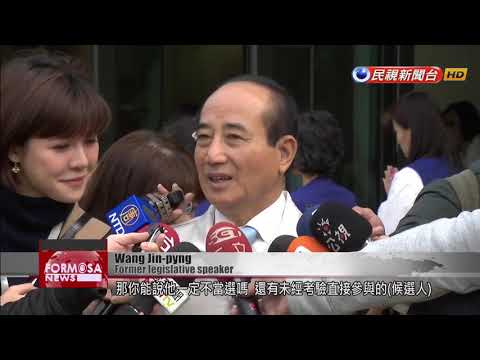 Anxiety is brewing among the KMT”s presidential hopefuls, after KMT Chairman Wu Den-yih suggested that the party”s nominee could be replaced if he or she fails to perform in the polls. His remarks have raised the spectre of the campaign chaos of 2015, when the KMT switched its horse mid-stream and was later handed a landslide defeat.The KMT has said their nominee for next year’s presidential election will be decided 70 percent based on public survey and 30 percent based on votes from party members. However, the party chairman said he isn’t ruling out the possibility of drafting a new candidate after the formal nomination process. His remarks were met with a sharp objection from party member and presidential hopeful Wang Jin-pyng.Wang Jin-pyngFormer legislative speakerThe person who is nominated through the system is, I believe, forged by fire. Would you be able to say that such a nominee wouldn’t get elected? And then there are candidates who haven’t been put to the test and who are plucked out based on polls that may not be very accurate. Would you be able to say that such a candidate would absolutely be elected?Wu Den-yihKMT chairmanI didn’t say for sure that there would be a second-stage draft. Of course the KMT is aiming to win. So long as we follow the law and work hard, we will not repeat what happened for the 2016 election. But we cannot foreclose any of our possibilities.Wu declined to elaborate on the issue. Observers believe the chairman is holding on to the draft option to leave open the possibility of Kaohsiung Mayor Han Kuo-yu as president.