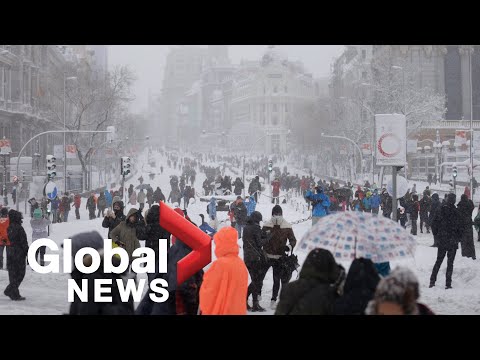 Four people died in Spain as Storm Filomena caused travel chaos across the country, blanketing Madrid in the heaviest snowfall in decades and forcing authorities to mobilize troops to rescue trapped motorists.

Rescue services reached 1,500 people trapped in cars, while skiers glided down Gran Via, normally one of the busiest streets in the capital.

More than 650 roads were blocked by snow, said Grande-Marlaska, leaving some drivers stuck in their cars from Friday night until Saturday.

Aena, which controls the country’s airports, said Madrid’s Barajas airport, which was closed on Friday night, would remain shut for the rest of Saturday.

It said at least 50 flights to Madrid, Malaga, Tenerife and Ceuta, a Spanish territory in North Africa, were cancelled.

The State Meteorological Agency said it was the heaviest snowfall in Madrid since 1971.