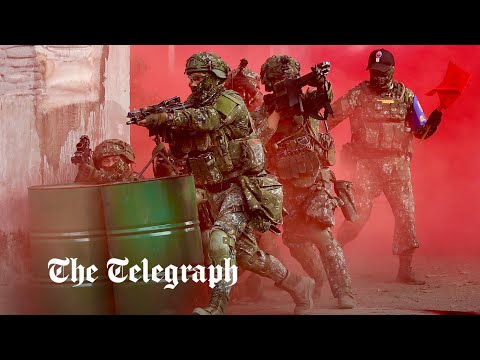 The local Irish pub, O’Donoghue’s, was one of the first buildings to fall as a military assault overran a small town in southern Taiwan this week in a barrage of deafening explosions and gunfire.

Moments earlier, a camouflage armoured vehicle had barged down an entrance road and heavily armed troops burst from the surrounding forest, sprinting over to lay siege to the streets.

Reebark Coffee, a café with a resemblance to Starbucks, went down in the same puff of red smoke as the pub. But the 7-Eleven convenience store was spared, thanks to a sniper firing shots from a second-floor window at soldiers wielding grenades.

The infantry, however, were uninjured as there were no live bullets in this fast-paced drill that used laser technology to practice repelling a ground force invasion by the Chinese army.

The mock 20-minute urban warfare exercise at a sprawling, leafy infantry compound in the city of Kaohsiung, comes against a backdrop of rising invasion threats from neighbouring China.

Get the latest headlines: https://www.telegraph.co.uk/

Telegraph.co.uk and YouTube.com/TelegraphTV are websites of The Telegraph, the UK’s best-selling quality daily newspaper providing news and analysis on UK and world events, business, sport, lifestyle and culture.