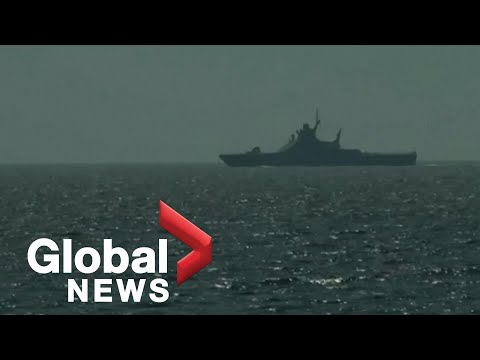 Russia is prepared to target intruding warships if they fail to heed warnings, a senior Russian diplomat declared Thursday after a Black Sea incident in which a British destroyer sailed near Crimea in an area that Russia claims as its territorial waters.

Russia said one of its warships fired warning shots and a warplane dropped bombs in the path of British destroyer HMS Defender on Wednesday to drive it away from waters near the Crimean city of Sevastopol.

Britain denied that account, insisted its ship wasn’t fired upon and said it was sailing in Ukrainian waters.

The incident marked the first time since the Cold War that Moscow acknowledged using live ammunition to deter a NATO warship, underlining the rising threat of military collisions amid Russia-West tensions.

British Prime Minister Boris Johnson would not say whether he had personally approved the Defender’s voyage but suggested the Royal Navy was making a point by taking that route.

“The important point is that we don’t recognize the Russian annexation of Crimea, this is part of a sovereign Ukrainian territory,” Johnson told reporters Thursday during a visit to an army barracks in England. “It was entirely right that we should vindicate the law and pursue freedom of navigation in the way that we did, take the shortest route between two points, and that’s what we did.”